Understanding the rendering process and lifecycles

Read about Beagle tree data structure in order to help you understand rendering.

Every Beagle Web library has a very well defined process of how it fetches, process and renders a view. There’s an order that must always be respected and hook points where the developer can execute some code of his own (lifecycles). 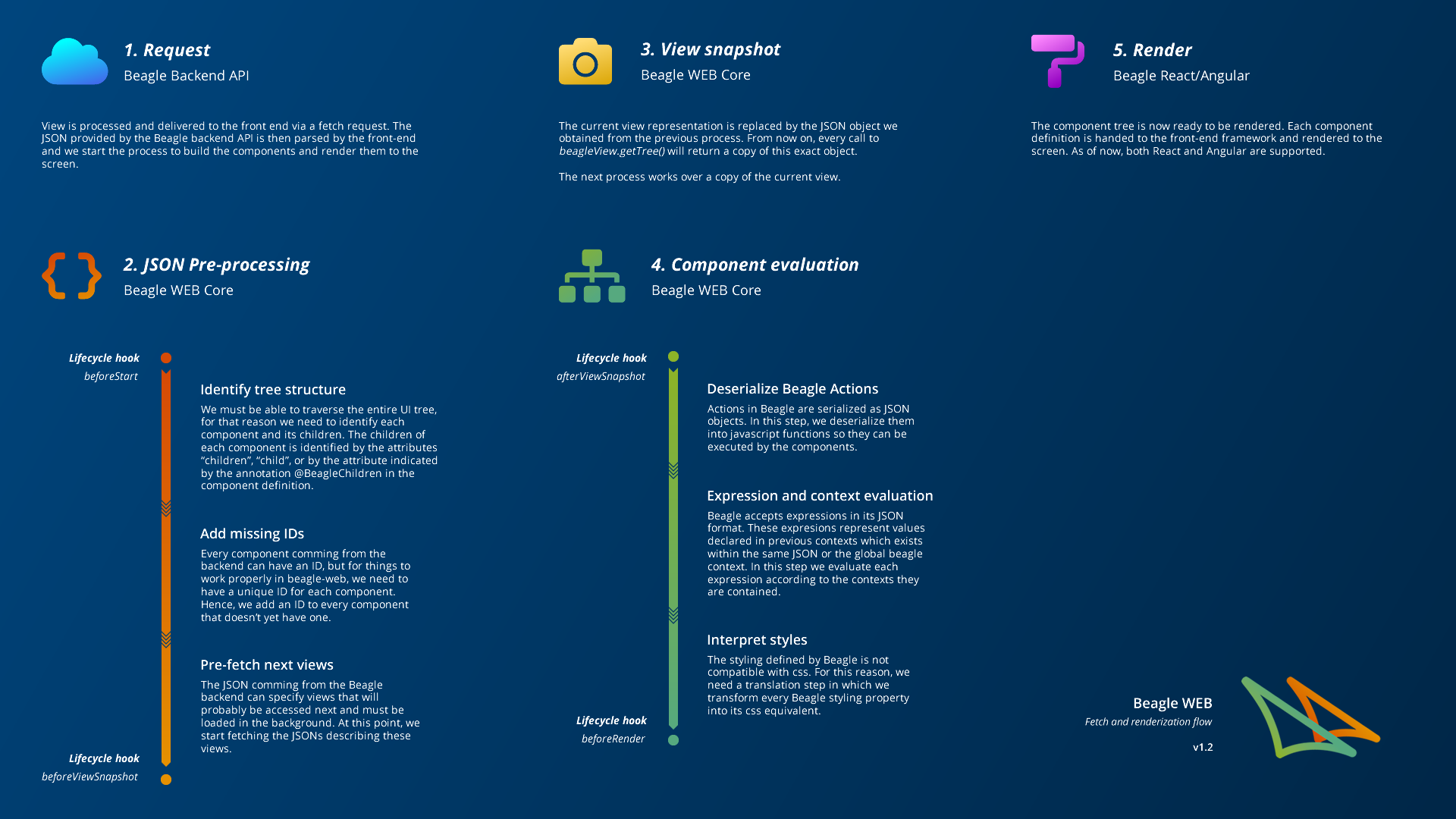 The Beagle lifecycles are:

They can be used as global hooks to the lifecycle:

Or local hooks to the lifecycles in a per-component basis (annotations/decorators):

The example above won’t work with Angular when building for production, because of the Angular compiler. To write a readable code you must choose one of two options:

Since annotations/decorators cannot be used for functions, if you have a functional component or if you simply don’t want to use decorators, you can use them as normal function calls:

It is important to notice, mainly for React, where Higher Order Components (HOCs) are common, that the component to receive the decorator must be the final component. For instance, if you want to apply a hoc named withTheme to your component:

The return value of a lifecycle hook can be either nothing (undefined) or a tree. If it is a tree, the rendering process will discard the previous tree and start working on the tree returned by the hook.

To take control over the rendering process, besides the lifecycles, Beagle also offers the Renderer API, which can be accessed through BeagleView.getRenderer(). The BeagleView can be accessed via the BeagleRemoteView component through the attributes onCreateBeagleView, in Angular and viewRefin React.

Lifecycles deprecates the feature middlewares. Middlewares will still be supported at least until the next major version (2.0.0) and they will be interpreted as they were part of the global lifecycle beforeViewSnapshot.

Beagle Web has a very well defined process from when a new payload is received to the moment it gets rendered in the browser screen. We also have some “breakpoints” in this process where you do your own stuff, this is called breakpoints “lifecycles”.

Process to render a view

See below the steps to render a view:

There are four lifecycle hooks, but you probably want to use just two of them: beforeViewSnapshot and beforeRender. The main difference between them is that the first runs before any expression or action has been evaluated and the second runs after. Also important to notice is that, when using the Renderer API, doFullRender will run both lifecycles, but doPartialRender will run only the beforeRender lifecycle.

Below, see detailed explanations and examples of each lifecycle:

This lifecycle runs before anything else. Here it should be done modifications that must happen before any id is assigned or any children property is computed. Since it runs so early, if the payload is not at all what Beagle expects, here is the place to completely change it.

Since the children translation has not run yet, components decorated with @BeforeStart might not run at all, since they might not be considered part of the tree. Take, for instance, a text inside a component table that has its children defined by the property rows. In this lifecycle, Beagle has no idea that rows actually represents the children of table and when traversing the tree, it would ignore everything inside rows, including the text we mentioned.

This is the only lifecycle where new nodes can be added to the tree and not have ids. Every lifecycle after this is run after the ids are assigned, i.e. if they add a new node, they must also provide its id.

This lifecycle can be used to ignore Beagle’s default id generation and use one of your own. Since Beagle only computes random ids for nodes without id’s, you can use this lifecycle to assign your own unique ids to every node.

Another use case would be complex children calculations. Let’s say the children of a table component is actually the union of three properties: header, rows and footer. This cannot be expressed via the decorator @BeagleChildren and is not at all what Beagle expects. This lifecycle could be used to remove these properties from the original JSON and create the property children, which would be the union of the three.

The code above works only if every other component has children as the name of the property that represents its children. If this is not the case, a global lifecycle should be used instead.

This feature could also be implemented using BeforeViewSnapshot, but, in this case, you’d have to assign id’s to every node inside the new property children, since in BeforeViewSnapshot the ids have already been assigned. See the example here.

Runs just before the view snapshot, useful to alter the payload, but after the ids were already assigned. This is where you should do most of your modifications to the tree, since id’s have already been assigned and the tree structure is ready to be traversed.

The only thing we must be aware of is: if we create any new node, we must assign an id to it.

Writing a shortcut to control text-inputs

It is possible to add a shortcut. Let’s say whenever the JSON brings the property model you create the entire structure automatically? In model, it must be typed which value in the context will control the input. Let’s see the same example, but now using this new property model.

Much simpler, right? But for this to work, you still need to write the lifecycle that will transform model to the expected structure.

With this code, despite receiving model from the backend, the payload processed by Beagle will have the expected values.

This example might not have worked if it was placed under the lifecycle BeforeStart. This is because, at this time, the children wouldn’t have been interpreted yet. Let’s say we had a component custom:table where the children is placed under the property rows and inside one of the rows there was a beagle:textInput. The property model wouldn’t be transformed for this particular text input, because, by this time (BeforeStart), Beagle still has no idea that rows are the children of a custom:table and the beagle:textInput would’ve been inaccessible.

The example from the previous lifecycle (BeforeStart) could also have been done here without the danger of skipping the component’s lifecycle due to a children property named incorrectly. The only difference is that we’d must assign the ids ourselves:

Differently from the two previous lifecycles, the changes done here are valid for the current render only. Since any update to the view is done over a tree based on the snapshotted view, the modifications done in this lifecycle are not permanent and will be executed in every render. For instance, if we have a property counter with the value 0 in the tree and in our lifecycle we increment counter by 1. In the 5th full render these would be the values for counter depending on which lifecycle was used:

This lifecycle can be used to run code that needs to run every time the view is rendered but doesn’t require actions, context, expressions and styles to have already been processed.

Contexts are defined, referenced and manipulated in the JSON of the view. But what if you want to access data of the application and not the view itself? Beagle offers a feature called “Global context” that is able to deal with this scenario, but suppose there is no Global context, you can still implement this behavior by using the AfterViewSnapshot lifecycle.

Let’s say you have a financial application and you want to show the user’s balance. You need to guarantee that, in every re-render, the most recent value for the balance will be used.

In the JSON above, use the context user, where it starts with empty values and the view has no way of knowing the correct values. Now, replace the values of the context in the JSON by the values you have in your application. See the example below:

The code above tells Beagle to replace the values in the context “user” by the values in the application. This piece of code cannot be placed before the view is snapshotted because we have the requirement to update the balance value in every render. It also can’t be placed in the next lifecycle (BeforeRender), because the context would then be already evaluated and our values wouldn’t be processed.

It is important to notice that the action setContext would not work over the context user, since you are always replacing the values for this context before processing any expression. This is just an example to show how this lifecycle could be used. To use application values in your Beagle view, it is always preferred to use the global context.

The changes here are valid for the current render only and is executed in every render. The difference from BeforeRender to AfterViewSnapshot, is that it is guaranteed that all actions, expressions and styles have already been processed.

When the backend decided to express colors in the following format: { red: number, green: number, blue: number }. For example, black would be { red: 0, green: 0, blue: 0 }. This is not a valid color for browsers, so we decide to convert the value of every color property to a valid RGB format. Basically, the function that could do this work is the following:

Now, just need to run the function above for every component in the tree. If you want to have a dynamic behavior for the color by changing it via the context feature, check the JSON below:

The text starts with a white background and as soon as the user presses a button, the background color changes.

If you call fixColorCodes before the context is evaluated, it will be trying to run with the string @{bgColor} instead of the object { red: 255, green: 255, blue: 255 } which will get you a massive runtime error, since red, green or blue are not properties of a string.

BeforeStart, BeforeViewSnapshot and AfterViewSnapshot run before the context gets evaluated, so everything that might be affected by the context, must be executed in the last lifecycle: BeforeRender.

Was this page helpful?

Glad to hear it! Please tell us how we can improve.

Sorry to hear that. Please tell us how we can improve.